Eruption refers to the process through which your teeth come out from the gums. It is not always however that the tooth will erupt when it starts growing. There are instances when it will fail to break through your gums usually because the space is inadequate.

In this instance, you are diagnosed with an impacted tooth. Any tooth can get impacted, but the most commonly impacted teeth are the wisdom teeth. Wisdom teeth appear between ages 17–21 and are your third set of molars.

Some cases of impacted wisdom teeth in Taylorsville are asymptomatic but most present with swollen and bleeding gums, excruciating headaches and swollen shoulder and neck glands. There are different categories of wisdom tooth impaction with varying approaches to treatment.

The following bits of facts will help you understand them.

This occurs when your wisdom tooth is positioned in a near-perfect position but has a challenge pushing through the gums. In most cases, the tooth will eventually push through the gums without any issues.

Tooth extraction might, however, be recommended if the vertically impacted tooth pushes on the bottoms of the adjacent molars or causes pressure on the jawbone. The removal is generally performed under local anesthesia, but sedation might be the choice in patients who are extremely nervous. 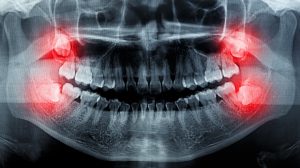 This is the most common form of wisdom tooth impaction. The tooth is tilted in a way that its top angles towards the front of your mouth thus pressing on the adjacent molars.

Mesial tooth impaction will more often than not result in a partial eruption in which the tooth’s bottom pokes into your gums. As such, most dentists will only monitor the tooth and see if it erupts properly.

This is the least prevalent form of wisdom tooth impaction and is the reverse of mesial impaction. Your tooth is tilted towards the back of your mouth. Like in mesial impaction, the degree of your tooth’s distal impaction determines its management.

If the tilt is close to zero degrees, then monitoring for the normal eruption is the ideal option since there is a high probability that the tooth will erupt adequately. If not, the dentist will extract the tooth under local or IV sedation.

This is the most severe form of dental impaction. The impacted tooth will lie horizontally and thus burrow into the roots of the adjacent molar causing excruciating discomfort. Horizontal impaction is diagnosed by a dental X-ray and requires extensive surgery to manage.

In some cases, a portion of the jaw bone might be removed in the process. Tooth extraction for teeth with horizontal impaction is hence done under IV sedation or general anesthesia. Antibiotics and analgesics are necessary after the removal to minimize the risk of infection and ease pain.

Few things in your life will be characterized by as much pain as that of an impacted wisdom tooth. Regular dental visits will spot impending tooth impaction before it happens. As such, the dentist will intervene early and prevent the above wisdom tooth impaction types from affecting your life.